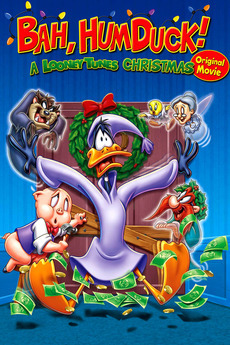 Bah Humduck! A Looney Tunes Christmas is a 2006 direct to DVD film based loosely on a very familiar Christmas story.
Advertisement:

Daffy Duck (in an Ebenezer Scrooge-like role) is the selfish and greedy owner of the supremely successful Lucky Duck Superstore, treating his employees, particularly his long-suffering Assistant Manager Porky Pig (playing the role of Bob Cratchit) like garbage. Bugs Bunny warns Daffy that bad things happen to people who mess with Christmas, and especially bad ones get visited by the Ghosts of Christmas. Daffy scoffs at this notion, but little does he know that he's in for quite a festive and frightening night.

This is actually the second Looney Tunes adaptation of A Christmas Carol, following 1979's short cartoon Bugs Bunny's Christmas Carol from the Christmas Special Bugs Bunny's Looney Christmas Tales. That adaptation is more faithful in setting to the original Dickens work, but is ultra condensed to fit an 8 minute long runtime. Porky Pig played the Bob Cratchit role in this one too.