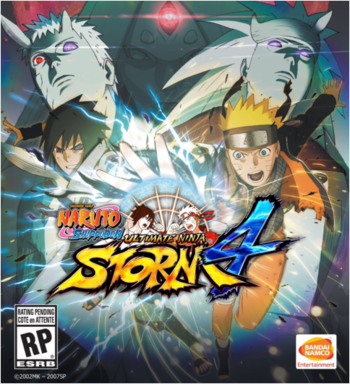 The saga comes to an end.
Advertisement:

Naruto Shippuden: Ultimate Ninja Storm 4 is stated to be the final entry in the acclaimed licensed game series based on the manga series of the same name by developer CyberConnect2 and Bandai Namco Entertainment. It is the first Naruto game to be on the 8th generation of console platforms, and though initially dated to be release in Autumn 2015, it was eventually released on February 4th, 2016 in Japan, February 5th in Europe, and February 9th, 2016 everywhere else on PS4, Xbox One, and Steam. A Nintendo Switch port was announced due for release on April 23, 2020.

Along with the mandatory graphical update, the game brings back the popular cinematic Boss Battles after their absence in Naruto Shippuden: Ultimate Ninja Storm Revolution.

The game takes from where Naruto Shippuden: Ultimate Ninja Storm 3 left off, mid-way through the Fourth Shinobi World War, and covers through the end of the manga storyline, including its Grand Finale. Also, it creates some original story content that partially covers the gap between Chapter 699 and the canon movie The Last: Naruto the Movie.

It's also the very first game of the franchise that, besides English and Japanese, also includes Mexican Spanish and Brazilian Portuguese voice acting for Latin America, also with the same voice actors from the Mexican and Brazilian dub of the anime.

CyberConnect2 released an adaptation of Boruto: Naruto the Movie as DLC on February 2017. Named "Road to Boruto," the DLC covers all the events of the film.

A new DLC was announced on November 2019 and released on April 23, 2020 alongside the Switch port. It adds Momoshiki and Kinshiki as playable characters, includes adult versions for the rest of the Konoha 12, and a new campaign as an expansion for Road to Boruto.