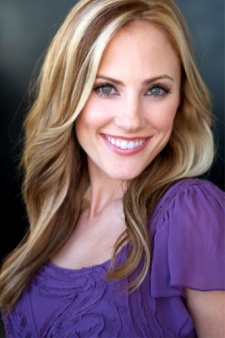 Alison Ruth Viktorin (neé Retzloff; born February 1, 1981), is a retired American voice actress born in Houston, Texas. She is well known as the first Conan Edogawa in Case Closed and has been around voicing many characters like Sasami in Sasami: Magical Girls Club, Kuroko Shirai in A Certain Magical Index (and Railgun), Kobato Hasegawa in Haganai and QT in Space Dandy.
Advertisement:

To add to this, she happens to have a degree in BA in Drama from California Lutheran University. She has been married to Dustin Kayne Viktorin since August 5, 2005.

She retired from anime dubbing in early 2021, due in part to negative feedback she received in regards to her posting several comments in support of the controversial pro-Donald Trump Capitol Riots to her public social media accounts.