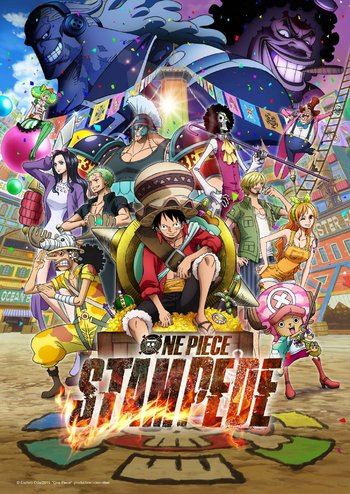 Welcome to the Pirate Expo!
Advertisement:

One Piece Stampede is the 15th film in the One Piece franchise. Was announced at the end of the Episode of Skypeia special and the name revealed in December 2018. Series creator and author, Eiichiro Oda, is once again a writer and consultant to the film (Though not a major one as in the previous three films, hence why this one doesn't have the "Film" in the title).

The story involves a treasure hunt for one of Gold Roger's treasures in the form of a Pirate Festival. Naturally, the Straw Hats get into the thick of it while going against other pirate crews, many from past adventures. However, unbeknownst to all is that the "hunt" is a ploy by Buena Festa, a war instigator and MC of the festivities, to lure pirates to the island where his partner in crime, Douglas Bullet, a former crewmate of Gold Roger, intends to wipe them all out.

The movie was released August 9th 2019. As with Strong World, Z and Gold, it has a anime tie in (though surprisingly just a two parter this time rather then the usual four), The Carbonic Acid King Arc. As well as a special collector volume for first time attendees (Japan-only naturally), "Volume Expo."

It was soon announced the movie will get limited international releases. In the U.S this was regulated to AMC theaters on Oct 24-31 both subbed and dubbed, making this the fifth One Piece movie to be dubbed.