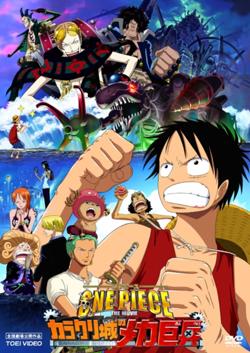 The Giant Mechanical Soldier of Karakuri Castle is One Piece's seventh movie. Despite not being canon, it's probably set between the Davy Back Fight and the Water 7 arc.

The films open with the Straw Hat crew finding a mysterious treasure chest in a sinking ship in the middle of a storm. They bring it back to safety on their ship, only to find out a weird old woman inside it. Said lady asks the crew to bring her back home in exchange for a treasure which is apparently hid on her island. Enticed by the offer, the crew set sail for Karakuri Island.

Upon reaching the island, they learn of a special poem which contains a code leading to the famed Golden Crown, however they're also antagonized by Ratchet (Goro Inagaki of SMAP), the ruler of the island and son of the elderly lady, who send his henchmen to chase away the pirates. However, when Luffy accidentally solves part of the riddle, he decides to ally with them in order to find the treasure of the island.

Of all the movies, this one was notorious for the many instances of Fanservice, like Nami and Robin's "breast enhancement".

Example of:
Rain of Arrows