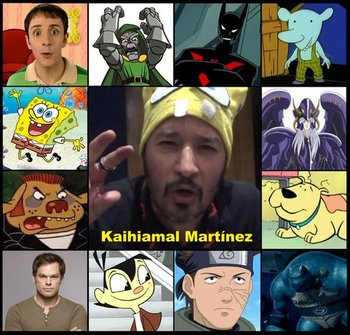 Kaihiamal Martínez, surrounded by some of his roles
Advertisement:

Kaihiamal Martínez González (born February 19, 1974) is a Venezuelan-Mexican voice artist. He is known for his range of voices, from high-pitched goofballs to menacing villains. For various reasons, mostly due to his firing from Etcetera Group and moving to Mexico, he has he has often been replaced by other actors, leading to his self-described nickname of "el hombre de la primera voz" (the man of the first voice). In addition to voice acting, he is also a sound effects artist, and is CEO of K&K Sound and Effects Design with his brother, Kaihiamarú.

Some of Kaihiamal Martínez's roles