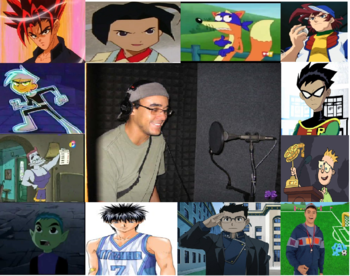 Ezequiel Serrano (center) and some of his roles

Ezequiel Serrano (born in 1978) is a Venezuelan singer and dubbing actor. Making his debut at age 6-7, he's voiced a great variety of characters, with his best known roles in Latin America being Daniel "Danny" Fenton in Danny Phantom, Robin and Beast Boy in Teen Titans, and being the second voice of Kenan Rockmore in Kenan & Kel.

As an experienced singer and musician, he's also performed many opening and insert theme songs, in series such as Beyblade, Six Teen, Danny Phantom (which he performed along with Luis Miguel Pérez), and the famous “Soy un Cacahuate" note "I'm a Goofy Goober" in Spongebob Squarepants: The Movie, among others.

He's currently retired from voice acting. At one point he was asked if he'd return to dubbing and locution work, to what he replied that he doesn't feel like it, because he never felt it was his thing. Nevertheless, he admits it feels good that people enjoyed his work and remembers it fondly.