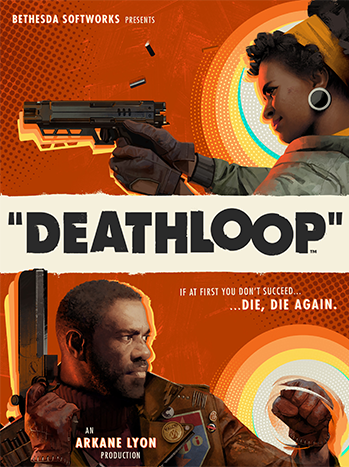 "So... protocol is in effect. Protect your Visionaries, kill Colt, and have a fulfilling day."
"This place isn't a paradise. It's a prison. Out here we're trapped... in this endless, eternal cycle. And I can't let this go on any longer."
— Colt
Advertisement:

You play as Colt, a Professional Killer trapped in a "Groundhog Day" Loop on the mysterious island of Blackreef, where Colt and the island's villainous inhabitants hunt one another endlessly in an unending 'party' of debauchery and violence. Using your growing Hyperspace Arsenal of weapons and supernatural abilities, you'll need to take out the 8 "Visionaries" ruling the stunning, chaotic island before the day resets in order to break the loop once and for all. By far the most dangerous Visionary is Julianna, a rival assassin whose sole mission is to take Colt out and keep the loop going... and the thing is, someone else can play as her too.

It released on September 14, 2021 for PlayStation 5 and PC via Steam and the Bethesda Launcher.