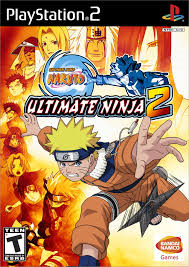 Naruto: Ultimate Ninja 2 is a Fighting Game developed by CyberConnect2 released on September 30th, 2004. Based on the Naruto franchise, it is the sequel to the original Ultimate Ninja game, and is thus the second installment of the now long-running Ultimate Ninja franchise exclusive to the PlayStation 2.

Much like its predecessor, the game is a 2D fighter that is framed from the Destruction of the Hidden Leaf Arc to the Search for Tsunade arc of the manga. It is the first game in the series to have a controllable overworld for the main story that uses locales from the manga and anime as a backdrop. The game takes what worked from its predecessor and updates it, containing a larger roster and updating aspects of returning characters.

The game would be released worldwide in 2007. The sequel, Naruto: Ultimate Ninja 3 would later be released in late 2005.