Video Game / The Evil Within 2 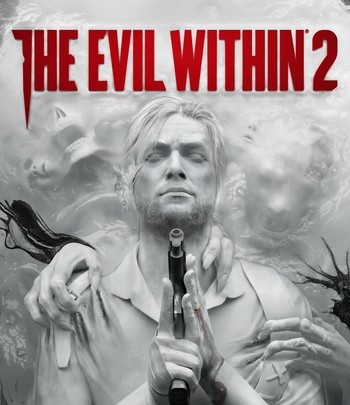 The only way out is in.
Sebastian: Are you coming with me or not?
O'Neal: I told you I wasn't going to leave this place. It's fucking EVIL out there.
Sebastian: That may be... but there's evil within, too...
Advertisement:

The Evil Within 2 is a Survival Horror title developed by Tango Gameworks, published by Bethesda, and the sequel to The Evil Within released in 2014, and released Friday the 13th on October 2017. Unlike the last game, Shinji Mikami is not directing the game, instead acting as a producer with the helm being given to John Johanas, who worked on the Kidman DLC for the first game.

Three years have passed since Sebastian Castellanos fought the horrors of STEM. Since then, he has been investigating Mobius in search of answers regarding the death of his daughter Lily, and disappearance of his wife Myra. Eventually, Sebastian learns from Juli Kidman that Lily isn't dead. Mobius had been watching Sebastian and his family for a long time, staged Lily's death, and used her mind to create another STEM system. However, the inside of the system has gone completely dark with no response to the outside world, and the Administrator of Mobius offers Sebastian the chance to reunite with his daughter, but to do so, he must go back inside STEM.

Due to the Late-Arrival Spoiler nature of this game, expect unmarked spoilers for the first game.

The Evil Within 2 has the following Tropes: