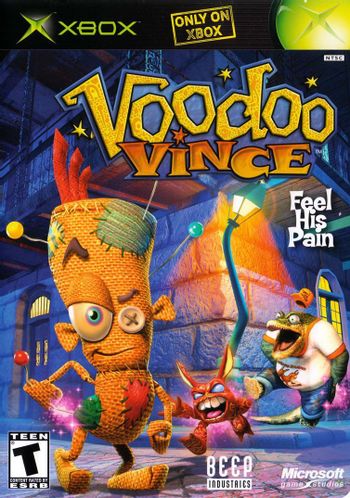 Feel his pain.
Voodoo Vince is a 2003 Platform Game for the Xbox about a Voodoo Doll come to life. His creator Madam Charmaine is kidnapped by passable Evil Sorcerer and seventh grade dropout Kosmo the Inscrutable, and he must rescue her by adventuring through crazy lands that have been warped and corrupted by "Zombie Dust". Voodoo Vince must use his voodoo doll powers and hurt himself to hurt enemies and progress.
Advertisement:

A hilarious game, rife with Irony and Lampshading.

The game was never made backwards compatible with the Xbox 360, nor was it re-released for Xbox Live, because the game used some unique custom code that prevented porting over on that platform. However, the game received a remastered version for Xbox One and Windows 10, primarily handled by the game's original creator, Clayton Kauzlaric. It was released on April 18, 2017.

This video game provides example of: