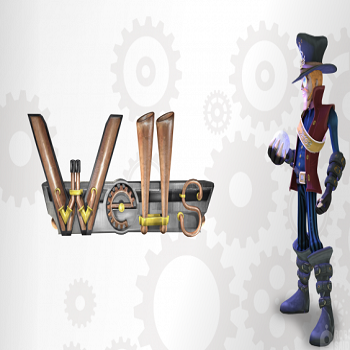 Wells is a Steampunk-themed 2½D Platform Game, developed by Tower Up Studios and released on January 30th, 2017 for Xbox One and for PC through Steam.
Advertisement:

George M. Wells is a notorious smuggler living in Percepolis, the so-called "city of the new century". Life was good up until he got betrayed by his latest client, a Mega-Corp boss named Hyde. Hyde has hundreds of men and the most cutting-edge automatons at his disposal, but he's about to learn this is nothing to match Wells' sheer grit (and regenerating ammo).