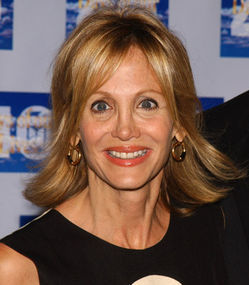 Arleen Sorkin (born October 14, 1955 in Washington, DC) is a retired American actress, screenwriter, presenter, comedian and walker talker who is known for portraying Calliope Jones on the NBC daytime serial Days of Our Lives and for inspiring and voicing the DC Comics villain Harley Quinn in Batman: The Animated Series as well as the rest of the DC Animated Universe and video games that followed it. Appears to have retired from acting. She is married to Christopher Lloyd (not that Christopher Lloyd), producer of Frasier, Wings, and Modern Family.
Advertisement:

She is not related to Aaron Sorkin.

Tropes pertaining to her acting and characters: