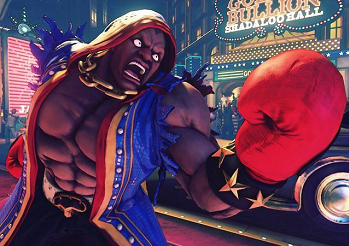 Since the Ancient Greeks invented boxing, the title of World Heavyweight Champion has been highly coveted, and the most prominent image is that of a Scary Black Man from the United States of America.

This archetype can be attributed from several sources, the most famous real life inspiration comes from Mike Tyson, George Foreman and Muhammad Ali, and the most famous fictional example is without question Apollo Creed, presented as the World Heavyweight Champion.

Although it's partially based on that famous boxer, this shouldn't be confused with The Tyson Zone, a trope about crazy things made by a person, based on the things Mike Tyson did outside boxing.

This kind of character can be identified by the following traits