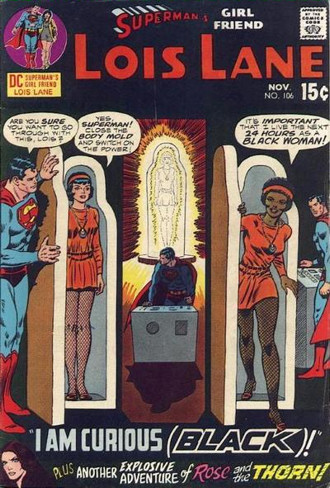 Professor Banks: You've learned something I can't teach them. You've learned what it feels like to be Black.
Mark: No, sir. I don't know what it really feels like, sir. If I didn't like it, I could always get out. It's not the same, sir.
Banks: You learned a great deal more than I thought.
— Soul Man
Advertisement:

Character disguises self, for some reason or another, as a member of another group (usually an African-American or a woman). To his surprise, people treat him differently, and An Aesop occurs.

Named for Black Like Me, John Howard Griffin's memoir about a social experiment of this variety that he undertook on himself. Not to be confused with Color Me Black.

Allows white people to experience racism from the point of view of a black person while giving white audiences a Lead You Can Relate To. Critics say that this leads to the Unfortunate Implications that white people can only care about prejudice if the victim is white.

Contrast with White Like Me. Contrast Color Me Black where the transformation is forced on someone to punish them or teach them a lesson.

Compare Master of Disguise, when a character is generally good at disguising themselves as someone completely different.