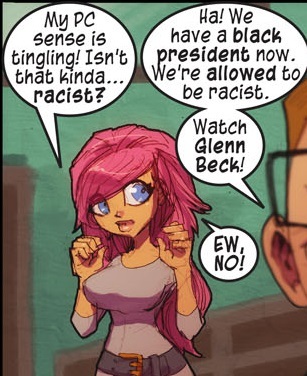 Sore Thumbs by Owen Gieni and Chris Crosby is a combination political satire and gamer webcomic. The premise is based on poking equal fun at political extremes by strawmanning them in the form of the main characters.
Advertisement:

The storyline follows Cecania, a Democrat who wants to make drive-through abortions available, her brother Fairbanks, a Republican who refuses to read the Bible lest he find something in it to question, her best friend Harmony, a ditzy and self-centered brain surgeon, and Sawyer, an ex-soldier who lost his manhood in Iraq and owns a pet talking miniature polar bear as they work in the eponymous video game store, Sore Thumbs.

You can find the comic here

The comic ran into some Schedule Slip issues in 2013, and the updates got less frequent until they stopped entirely in May 2014. The most recent word from the authors (May 2016) is that they intend to bring the comic back as soon as they have time.