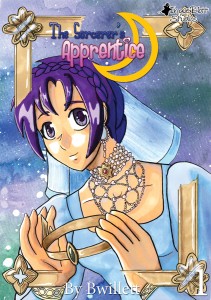 is an original webcomic from the desk of Bwillett

/ Clowprincess / Nasdreks, author of other fan webcomics such as Cardcaptor Torika and Queen of Games.

Victoria Evans is a (relatively speaking) seemingly normal 17-year-old girl from White Ivy, a seemingly-normal town in Connecticut. One day, she takes a seemingly-normal field trip and stumbles upon a lost Italian Renaissance ring. In an attempt to return the ring to its guardian, college sophomore Renard LaFayette, Victoria winds up inadvertently putting it on and releasing its power: a horde of rampaging monsters! To defeat them, Victoria must unite with the spirit of a 700-year-old magician, Allister Magi de Illuminatis, one of the greatest practitioners of "magic" in his day. Except it isn't really magic... but science!

Though the premise is largely very typical for a Magical Girl series, the series takes a much more realistic (and occasionally cynical) look at many of the tropes present in the Magical Girl genre, occasionally even poking fun at them. Many characters are Genre Savvy (or at least savvy of something), and many tropes listed below are played with, subverted, and averted because of it. The drawing style is also distinctly manga-like, noteworthy for the occasional cutesy panel that breaks up an often serious scene. The author also employs a number of western conventions and pop culture references, particularly to western comics.

The series shares many cosmetic similarities to Cardcaptor Sakura, a series commonly thought (including by the author) to be one of the most codifying examples of the entire genre. Much like Cardcaptor Torika, the author instead deconstructs the entire premise, leaving little similarities to its precursor beyond these cosmetic similarities. Unlike the older Doujinshi, since The Sorcerer's Apprentice is a wholly original series, the author is free to take this same deconstruction even further.

Not to be confused with the 2010 Nicolas Cage movie, the Disney version, or the "Sorcerer's Apprentice" styled plotline.