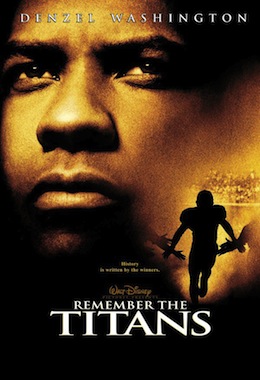 "Tonight we've got Hayfield. Like all the other schools in this conference, they're all white. They don't have to worry about race. We do. let me tell you something: you don't let anyone come between us. Nothing tears us apart. In Greek mythology, the Titans were greater even than the gods. They ruled their universe with absolute power. Well that football field out there, that's our universe. Let's rule it like titans."
—Coach Herman Boone
Advertisement:

A 2000 film Based on a True Story about a Northern Virginia school that experiences an enforced racial integration in 1971, merging the black students with a white school and neither side being particularly happy about the arrangement. Both schools had a proud football team and now they are forced to come together and play as one team. In an effort to placate critics, they hire a new coach, Herman Boone (Denzel Washington), to replace the beloved coach of the white team, Bill Yoast (Will Patton). Boone disliked being hired over Yoast (having experienced some of the same racial politics in the past), but pleads with him to stay on as the defensive coach despite being qualified to take on head coach at nearly any school of his choosing.

Boone and Yoast lead the new team to training camp not far from Gettysburg and Boone enforces an integration policy that all of his players must abide by, the team will not separate into black and white "cliques." The various team members are fleshed out, with one of the strongest friendships form between the team captain Gerry and Julius, one of the leaders of the black side. The team eventually sees past color but once the season starts they find things to not be as easy outside the game. Despite this, they earn respect on the field and that unifies the town better than anything else.

Despite the title and the film being about football, it has nothing to do with the Tennessee-based NFL team. Or Titans of the man-eating variety.