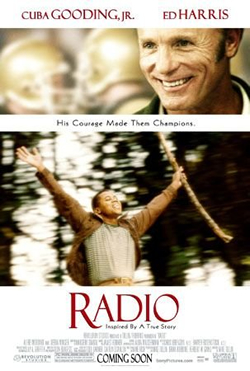 Radio is a 2003 drama directed by Mike Tollin, fictionalizing the unlikely, yet inspiring friendship between respected high school football coach Harold Jones (as portrayed by Ed Harris), and a mentally challenged young man named James Robert Kennedy (Cuba Gooding Jr.), and the impact he ends up having on the small town of Anderson, South Carolina, especially T.L. Hanna High School.

James Kennedy was given the Affectionate Nickname "Radio", because of his fascination with radios of any kind. As Coach Jones coaxes Radio out of his shell, his presence amongst other students and athletes at T.L. Hanna raises some eyebrows, and causes some stirring at first, but Radio manages to win over people's hearts with his sweet-natured spirit, and the unconditional love he has for those around him, something that Coach Jones puts into words, "We're not the one's who've been teaching Radio - Radio's the one who's been teaching us. Because the way he treats us all the time is the way we wish we treated each other only part of the time."

Although the actual events of Radio and his relationship with Coach Jones and T.L. Hanna spanned several years, the movie condenses it down into a year's worth of time, taking place in The '70s.