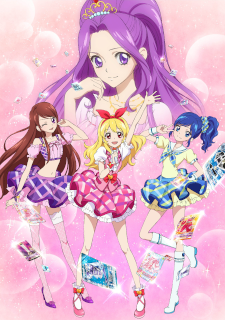 From left to right, Ran Shibuki, Ichigo Hoshimiya, and Aoi Kiriya. Mizuki Kanzaki is in the background.
"My passionate idol activities - Aikatsu! - is about to start!"
— Ichigo Hoshimiya
Advertisement:

Aikatsu is an anime adaptation of the game of the same name by Sunrisenote The production team working on this series has since been spun off into a separate division called Bandai Namco Pictures and TMS Entertainmentnote through their Telecom unit, first season only. It tells the story of a middle school student called Ichigo Hoshimiya who joins Starlight Academy with her best friend Aoi Kiriya to become an idol. On October 3, 2013, Season 2 introduced the Constellation System and new idols Seira Otoshiro, Kii Saegusa, Sora Kazesawa, and Maria Himesato - all of whom attend the rival idol school, Dream Academy.

Then, in the final season, we get a slight change of pace. Season 4 follows Akari Ōzora as part of the unit Luminas, alongside her friends Sumire Hikami and Hinaki Shinjō. They meet various idols all over Japan, while two new idols from Hokkaido, Nono Daichi and Lisa Shirakaba enter Starlight Academy to start their Idol Activities.

The series ran for four seasons and 178 episodes, from 2012 to 2016, and aired its final episode on March 31, 2016. It was replaced by an entire-series remake/upgrade known as Aikatsu Stars!.