Film / Confessions of a Psycho Cat 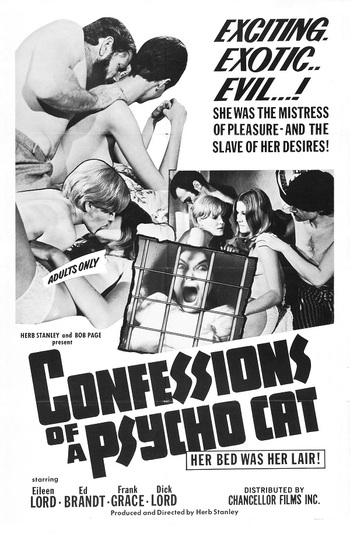 The Most Dangerous Game gets a slightly sleazy big-city re-write in this 1968 exploitation thriller directed by "Eve" (aka Herb Stanley).

Virginia (Eileen Lord) is a high-strung, borderline psychotic socialite from a wealthy Manhattan family. Virginia was planning on joining her equally crazed brother for a hunting trip abroad, but when Virginia is forbidden to attend, she decides to set up some interesting big game hunting of her own. Virginia persuades three down-and-out men — failing actor Freeman, pathetic drug addict Buddy, and down-on-his-luck wrestler Rocco (Jake LaMotta) — to accept an unusual offer. Virginia will hunt them like animals for 24 hours on the streets of New York City, and if they survive, they each get 100,000 dollars. All three men agree and lay low in order to avoid running into Virginia or her henchmen, but Virginia is able to lure them into the open, and they all find themselves running for their lives.