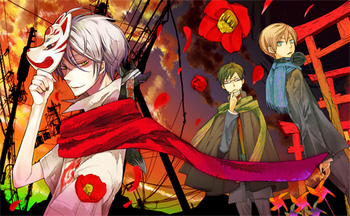 The second visual novel released by Haccaworks, released in 2011. It follows the story of a boy named Yue who lives in a mountain shrine. One day he and his spirit fox friend Kurogitsune decide to sneak out to a festival outside the shrine...

The game inspired a manga in the magazine Comic Gene. Several drama CDs were also released.