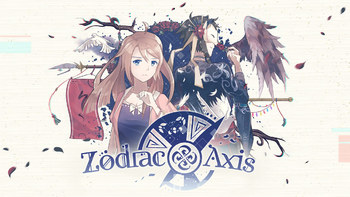 Don't run, little human. If you do... I just might have to chase you.
Advertisement:

Upon graduating from Lunar City University with a degree in journalism, Alison Harte is desperately looking for an entry-level job to gain her a foothold in the field. One day, she receives a phone call from a person that introduces themselves only as 'Pathfinder', allegedly the founder of the infamous online tabloid Supernature, for whom no story is too outlandish to be published, as long as supernatural events are involved. After a bizarre (and bizarrely short) interview, Alison is hired to investigate six apparently unrelated individuals that Pathfinder claims house the 'Spirits of the Zodiac' and thus wield mysterious powers connecting them to the ancient founders of Lunar City.

Alison accepts the nonsensical job - after all, there is no way something this far-fetched could be real. All of the subjects appear to be perfectly ordinary people leading average lives: mild-mannered diner owner Beckett Armistice, gruff delivery man Halten Augustine, bubbly singer-songwriter July Regale, paranoid sound engineer Leaf Lewis, pragmatic businesswoman Marin Teller, and laid-back primary school teacher Zaxary Harvenfest. And, huge ad revenues and her mysterious, voice-changer using boss aside, Supernature is nothing but a bunch of hokey conspiracy theories... right?

Zodiac Axis is a visual novel that blends suspense, romance, and Asian-inspired fantasy elements using charming characters and a lush worldlore. Alison has to balance her job at the tabloid (and, indeed, writing good articles is part of the game), her growing relationships with the people she is investigating, and a slew of attempts on her life as part of a tangled web of lies and mysteries surrounding the Zodiacs and Lunar City as a whole. A demo version is currently available for free.

Unfortunately, active development on the game was halted

in January 2020 due to a combination of technical issues setting progress back by 6 months to a year and creative burnout from the dev team. As of 2021, the game is in development "in the background," with no official release date.