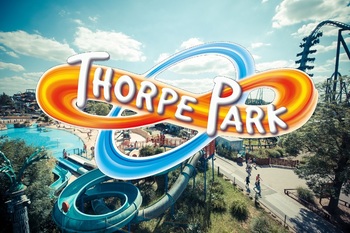 Thorpe Park is a theme park located in Surrey, UK. Like England's two other major theme parks, Alton Towers and Chessington World of Adventures, the park is owned by Merlin Entertainments Ltd, though it differs in that it mainly targets young adults and teenagers rather than families.

The park was built in 1979 on a partially flooded gravel pit, creating an artificial ‘island’ on which it was originally themed; hence the ‘island like no other’ slogan. Throughout the year the park hosts many shows and events, the largest of which being the Halloween ‘Fright Nights’ in October where many new live action mazes and attractions are created, all of which qualify for a fun bit of Nightmare Fuel. Currently there are seven major roller coasters, eight minor flat rides and five water rides, as well as a host of other games and attractions.

In July 2016, the park opened the doors to its most expensive ride yet: a new dark ride named "Derren Brown's Ghost Train", designed by the famous illusionist. Described by its creators as a ghost train "re-invented for the 21st century", it is a thirteen minute long ride that utilises physical sets, live actors, special effects and Virtual Reality, and has been called the first ever multi-sensory theme park experience.

The park was featured prominently in an episode of The Inbetweeners.

Other attractions include interactive 'live action mazes', one of which is also based on the Saw films, another on the Reality Show I'm a Celebrity... Get Me Out of Here!, and a third based on Black Mirror. There's also a section of the park called Angry Birds Land and a 4D movie based on said games.

Tropes used by Thorpe Park include: