Video Game / And Yet It Moves 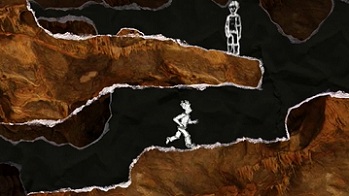 And Yet it Moves is a puzzle platformer developed by Broken Rules. It is available on Steam and WiiWare.

The protagonist is a little paper doodle man who navigates a paper world. Gameplay centers around rotating the world, changing gravity in order to overcome gaps and walls. Pay attention, 'cause if you fall too far you break. Tsugh! The Steam version only allows 90 degree angle rotations while the WiiWare version uses motion controls to finely rotate at any angle.

And Yet it Moves contains examples of