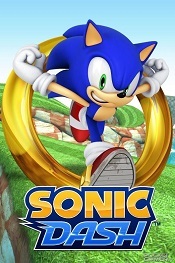 How long can you run?
Advertisement:

The One With… Sonic dashing.

Sonic Dash is a free-to-play Endless Running Game developed by Hardlight and published by SEGA for iOS, Android and (formerly) Windows devices. It is set in the Sonic the Hedgehog franchise.

The game plays much like fellow Endless Running Game Temple Run, but has its own unique spin on things. Unlike Temple Run, which is controlled by both tilt and touch controls, Dash is played completely using touch controls, a decision that critics and fans have both unanimously praised. Being a Sonic game, Dash also moves at a significantly faster pace than Temple Run, and using the Spindash ducking move, Sonic can also destroy enemies in his path. Power-ups such as ring magnets and head-starts can be obtained both in-game and via the game's store. Some items and upgrades can be purchased using the standard gold rings you collect during game play, but others must be purchased with special red rings that can be obtained by completing missions and buying them with physical money from the in-game store.

On October 31st, 2013, a boss battle featuring Zazz from Sonic Lost World was added to the game. A battle against Dr. Eggman (which is really just a reskin of the Zazz fight) was later added on February 13, 2014. A sequel was made in 2015 that focused on the Sonic Boom cartoon. A arcade version named Sonic Dash Extreme likewise followed where you play for tickets.

Elements first introduced in Sonic Forces: Speed Battle, then carried on to here should go on that respective page. Vice-versa applies.