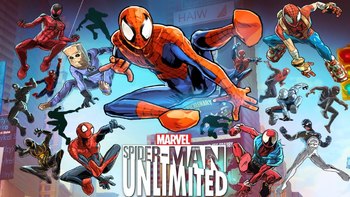 Spider-Man: Unlimited is a 2014 Endless Running Game by Gameloft for the iOS and Windows Phone, featuring countless versions of Spider-Man, Spider-Woman, etc.; inspired by and even crossing over into the Spider-Verse event.

The game was eventually shut down in March 2019.

Not to be confused with the 2000 cartoon Spider-Man Unlimited, who was slated to be in the game, but ended up not making it.