Comic Book / Ends of the Earth 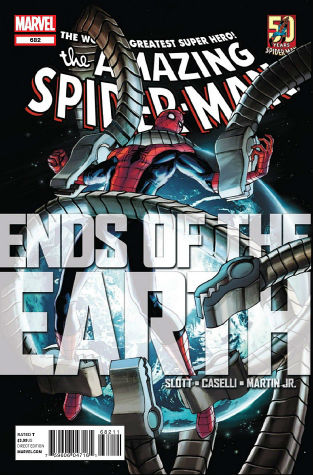 "He'll go to the ends of the Earth to protect you."
Advertisement:

The major Spider-Man storyline of 2012, and part of the 50th anniversary of Spider-Man's first appearance.

Otto Octavius is dying. Thanks to the various injuries suffered in fights against Spider-Man, Captain America and others, Doctor Octopus has found his body failing him and after months of failing to find a cure, he has instead decided to focus on the legacy he will leave behind - Otto Octavius has found a way to stop Global Warming. Supposedly. Spider-Man doesn't trust him, for good reason. If Octavius is lying or not is irrelevant - he's holding the world hostage with his dying breath.

What price will Spider-Man have to pay to stop him and buy the world another day?

And what if Doctor Octopus is telling the truth?

Notably, this story was the final appearance of Big Hero 6 in the Marvel Universe before they were spun off into their own separate franchise.note The final mentions of their existence, however, occurred in the sixth and seventh issues of All-New Invaders, released months before the movie.

Ends of The Earth provides examples of: