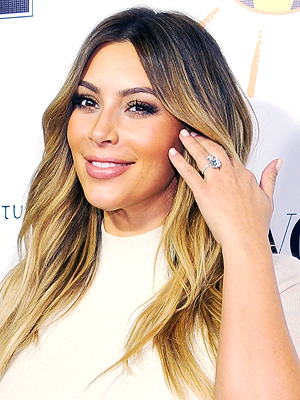 Kimberly Noel Kardashian West (born October 21, 1980) is an American celebrity most known for... well, being a celebrity.

Born and raised in Los Angeles, California; the second eldest daughter of the late Robert Kardashian, famed attorney from the O.J. Simpson trial, Kim has become, along with longtime boss/friend Paris Hilton, a poster girl for socialites who become famous simply for merely existing in the world into which they were born. She first gained media attention through her friendship with (and as a fashion designer for) Hilton, but she received wider notice after a 2003 sex tape with her former boyfriend, R&B singer Ray J was leaked in 2007. Later that year, she and her family began to appear in the reality television series Keeping Up with the Kardashians. Its success has led to the creation of Spinoffs focusing on her extended family.

Like Hilton, Kardashian and her family have been known for a great amount of hatred due to their status of famous for being famous, and the world just seems to love that. In fact, the hate has gained her more popularity that has surpassed what Paris has achieved for the status on "famous for being famous". She's also known for her blithe ignorance and oblivious stupidity, particularly due to a "good will" mission to Haiti in 2012, which has actually earned her the ire of the entire country due to her actions on it, most notably refusing to visit an orphanage, and instead demanding the orphans be bussed to her.

In the summer of 2018, she began an apprenticeship with a San Francisco based law firm to eventually become a licensed attorney. California allows for one to forgo law school and take the bar if completing a four year program like this. She hopes to take the bar in 2022.

Additionally, there's her on-again, off-again relationship with New Orleans Saints player Reggie Bush, and her short 72-day marriage to New Jersey Net Kris Humphries. She was married to and had four kids (two boys, two girls) with Kanye West from 2014 to 2021.