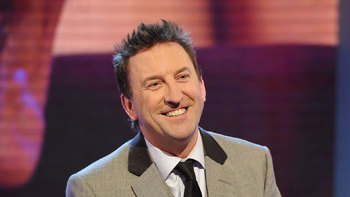 Lee Gordon McKillop (born 4 August 1968), better known as Lee Mack, is a fairly prominent British stand-up comic, presenter and actor, notable for his no-nonsense (or maybe that should be all-nonsense) style of performing: he never attempts to include any overarching themes or emotional depth, as modern stand-ups often do, he just says whatever he thinks is funny.
Advertisement:

He's a team captain on Would I Lie to You? opposite David Mitchell, forming a much-milked Odd Couple relationship, and is the creator and star of sitcom Not Going Out opposite Tim Vine, forming another much-milked Odd Couple relationship. He has also presented a Variety Show entitled Lee Mack's All Star Cast. He's also very Northern. He was also a part of the five-person comedian cast of The Sketch Show.

Additionally, he hosts a podcast, titled I Can't Believe It's Not Buddha, where he discusses how he turned to Buddhism and how his journey toward spiritual enlightenment is going.