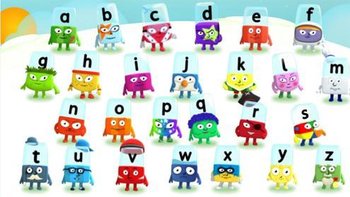 An Edutainment Show currently running on CBeebies which aims to teach children how to read and write using anthropomorphic letters called the Alphablocks. The Alphablocks live in a blank white world note  Not quite a Blank White Void, since the sky is visible and the sea appears in a couple of episodes, but the land is plain white., but when they hold hands to spell a word, that word comes to life, allowing them to fill it with colour and fun. The show aired between 2010 and 2013, but reruns are currently airing.

The show was created by Joe Elliot, who also created a simular concept, Numberblocks.

See also The Letter People, a puppet show based on the same concept.