Film / Dr. Who and the Daleks 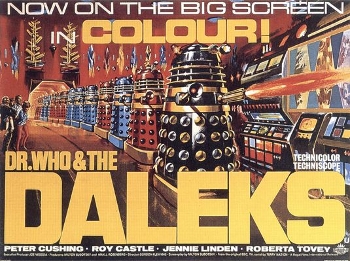 The one on the big screen; well, the first one, anyways.

Dr. Who and the Daleks is a 1965 film that cashed in on the craze of Dalekmania by adapting the Doctor Who serial "The Daleks" into a cinema spectacle (albeit distilled into an Alternate Continuity simpler than the show). It features the Daleks (IN COLOUR!) battling against Peter Cushing as Dr. Who.

It was followed a year later by Daleks' Invasion Earth: 2150 A.D., which did nowhere near as well.

Dr. Who and the Daleks provides examples of the following tropes: