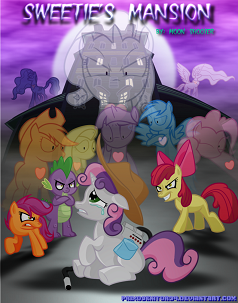 When a strange mansion appeared out of nowhere in the outskirts of Ponyville, the Mane 6 are invited to a housewarming by Specter Yield, the owner of the mansion. Hours after they leave to attend the party, the Cutie Mark Crusaders crash land their paper airplane during their latest misadventures to get a cutie mark in the area around the mansion. Sweetie Belle finds herself alone in the forest, separated from the rest of the CMC, and eventually comes across the mansion and the owner’s butler. After being invited to stay in for the night, Sweetie wakes from a nightmare to find a ghost attacking her and just before the ghost takes her, Sweetie is saved by an old pony with a strange vacuum who turns out to be none other than Twilight Sparkle.

When Sweetie is brought into the safe room, which is a strange laboratory, Twilight explains that she and the rest of her friends were attacked by the ghosts in the mansion and she barely got out of it alive. Since then, Twilight has been trying to save her friends but has become too weak and old to keep doing this. Sweetie eventually convinces Twilight to let her save her friends instead and after giving her a few pointers about ghost hunting with the Ghost Capture Device, GCD for short, Twilight reluctantly sends Sweetie off into the mansion to figure out the mystery of the mansion, save her friends, and most important of all, find her sister Rarity.

Sweetie’s Mansion is a semi-crossover fanfiction that is based on Luigi's Mansion, where Sweetie Belle, just like Luigi, has to search a mansion filled with ghosts to find their missing sibling. But this fanfiction takes a unique spin on it where no Mario characters appear, there’s a bigger mystery to be solved and all of Sweetie’s friends, save for a few, are turned into ghosts that want to kill her. Basically unlike Luigi's Mansion Sweetie must defeat her friends in order to save them. The question is can she really do all of that when she’s just a young kid? The only way to find out is to read the fic here.