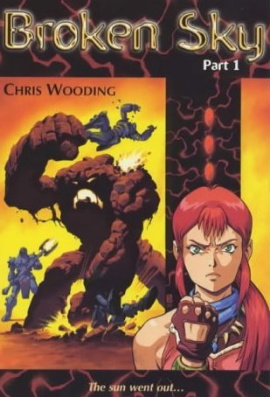 The series follows the lives of twins Ryushi and Kia after their secluded home in the mountains is attacked and they find themselves in the world they've been sheltered from for so long. Unfortunately for them, this world (called the Dominions) happens to be controlled by the insane monarch King Macaan who is slowly gaining total control of the people. The rest of the series follows the efforts of Parakka in the beginning world of the Dominions and eventually its mirror world of Kirin Taq (controlled by Macaan's daughter, Aurin).

Like many anime - the storytelling and artform which served as Broken Sky's inspiration - the denizens of the universe have access to magical power, albeit with considerable financial expense. Spirit stones are, as the name suggests, small jewel-like crystals which, once implanted, attune themselves to ley lines and, through them, grant the bearer certain abilities. The more stones a person has, the more powerful their abilities are.

The stones are implanted along the spine - between the ridges of the vertebrae - shortly after a child's birth as part of a special ceremony (the pah'nu'kah), performed only by members of an enigmatic group called the Deliverers. The Deliverers, using a combination of their own innate power and an intuitive vision of destiny, coax the stones into changing their colour to match the newborn's later life.

This "destiny" can either be a facilitator of a person's future profession, such as blacksmithing or the ability to pilot mechanical vehicles, or the ability to manipulate something which associates with their personality. The lead characters - twin siblings Ryushi and Kia - have six spirit stones each, as does their elder brother Takami. Ryushi's blue stones allow him to create (initially uncontrollable) blasts of concussive energy, Kia's red stones allow her to manipulate the earth while Takami's spirit stones allow him to create green flames at will.

Amidst the people of the Dominions are Resonants. While these people - for reasons never explicitly stated - cannot have spirit stones implanted by the Deliverers, they have an ability all their own. Resonants are the only people able to effectively teleport between the two halves of the Broken Sky universe: the Dominions in which Ryushi and Kia were born and the perpetually-twilight land of Kirin Taq.

The series is inspired heavily by anime, as stated by Word of God in Wooding's webpage for the books.