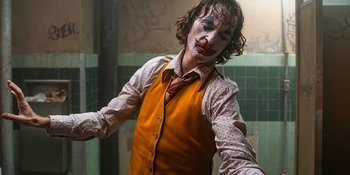 Dancing, by yourself, in a men's room, in clown makeup? Something ain't right...
Advertisement:

This is a desperate attempt to cope with a character's unsolvable problems through a frantic dance sequence.

The character in question will most likely be in the middle of a Heroic BSoD or a Despair Event Horizon. A Stepford Smiler would be the most likely person to attempt this kind of dancing, either to make the amounting troubles go away, or just to cope with them. You would most likely have this attempt when someone else is around. When the character is left to herself (or himself), a Despair Speech is imminent. The dance may prove to everybody else that everything is splendid, no problem here, just move along (please).

Compare/contrast Happy Dance, Angry Dance, and Working Out Their Emotions. A subtrope of Cope by Creating. Musical variants to dealing with grief and despair include Melancholy Musical Number, Songs of Solace, Grief Song or Break-Up Song.

Harry tries to cheer Hermione up by dancing with her.

Harry tries to cheer Hermione up by dancing with her.