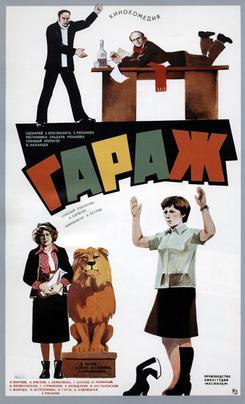 The Garage (Гараж) is a 1980 film from the Soviet Union, by Eldar Ryazanov.

The staff of a zoological institute have gotten together and formed a cooperative to facilitate the construction of a parking garage. With everyone having paid their dues and earned spaces in the garage, construction is now set to begin. A late-night meeting of the co-op at the institute's natural history museum proceeds smoothly, until the co-op board drops some bad news. It seems that the government is going to build a new highway which will skirt the edge of the lot where the parking garage is going to go up. Consequently, four people are going to lose their spaces in the now slightly smaller garage.

The co-op board picks four unlucky people to lose their parking spots. They are, unsurprisingly, four of the least popular and least well-connected. Guskov the crane researcher isn't even there, being off in Siberia doing his research; he's represented by his wife. Yabukov is retired from the institute. Khvostov (Andrey Myagkov) can't even talk, having lost his voice after diving into cold water to save a seal. And Fetisov just generally seems to be a loser. The vote is taken and the meeting seems to be over. However, the four unlucky folks refuse to give up that easily, loudly protesting, accusing the board of corruption. They are supported by Lidia Malayeva, a junior researcher studying for her Ph.D, who pleads for her fellow members to behave better. Things really start to go sideways when Malayeva sneaks off with the keys and locks everyone in.

Inspired by… a real-life incident in which Eldar Ryazanov attended a meeting regarding the garage co-op for Mosfilm, which deteriorated into a series of very ugly arguments after some of the members lost their spaces.