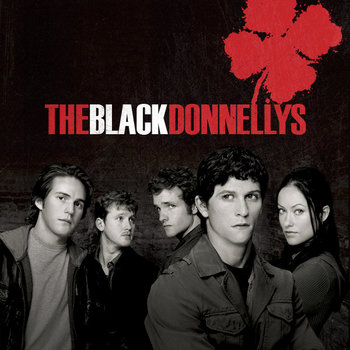 Pay attention this time. I hate repeating myself.

A short-lived 2007 NBC drama created by Paul Haggis that consists of 13 episodes. Six were actually aired on the network; the other seven were only released online (and subsequently DVD).

The Black Donnellys follows four young Irish-American brothers in New York who get involved in organized crime, with varying degrees of intent. When Kevin can't pay off a gambling debt, his brother Jimmy helps him kidnap the Italian bookie in hopes that the ransom money will get them out of trouble. Instead, the boys' youngest brother Sean is attacked by the Italian mob in retaliation and lands in the hospital; in response, Jimmy kills the bookie. Trying to get his brothers out of trouble, Tommy kills the local heads of the Italian and Irish mobs and accidentally takes over the neighborhood.

Then everything goes to hell.

Canceled by NBC for poor ratings despite being one of the most downloaded new series on iTunes.

Incidentally, the name is a Shout-Out to a notorious Canadian family who were participants in a violent community feud near Haggis' childhood home of London, Ontario; many of them met their end in a bloody home invasion massacre by their enemies.

The Black Donnellys provides examples of: