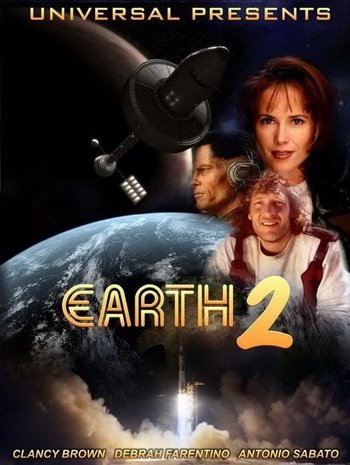 Earth 2 (1994-1995) was a science fiction adventure TV series in The '90s, produced by Amblin Entertainment. It featured an advance team of human colonists who crash-land on the remarkably Earth-like planet G889 (the titular "Earth 2") and have to find their way to their originally-dedicated landing site, the region of New Pacifica.

However, the planet contains surprises that the colonists could not have anticipated. Indeed, some information about the planet, like the fact that it's been used as a penal colony for dangerous criminals, and that it's populated by several native intelligent species, were deliberately hidden from the colonists by humanity's future government. And complicating matters further, the government has a mole among the colonists.

This show was notable for several things: A heavy handed message about environmental responsibility, mostly outdoor shooting in lesser-seen landscapes, plenty of practical effects, its female protagonist (played by Debrah Farentino) and overall strong female cast, and casting Clancy Brown as one of the good guys.

No relation to the 1971 made-for-TV movie Earth II, the album by drone metal band Earth, or the comic book of the same name.