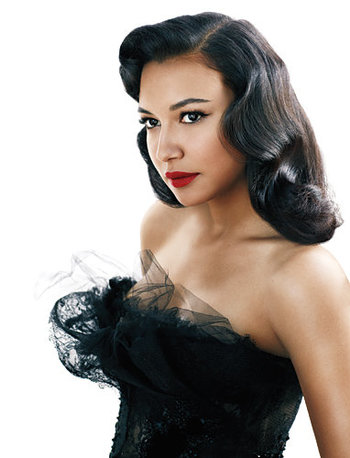 Naya Marie Rivera (January 12, 1987 - July 8, 2020) was an American actress, singer, and model. Depending on your age, tastes and locations, she can be best known for her work as a child star, her roles on Glee or Devious Maids, or her relationship with Big Sean. Or the M&M's commercials. She was also a song- and screen-writer. Rivera has also been known professionally as Naya Marie.

Born in California in 1987, she was signed to the talent agency that represented her mother at a young age. Being half-black and predominantly displaying these characteristics in childhood, she consistently took lead and recurring black roles in the nineties and the aughts. In the late aughts, Rivera's lead roles diminished and she instead took up work as a nanny, a Hooters girl and a greeter at Abercrombie & Fitch, before returning to acting by auditioning for Glee and more subsequent Latina roles after being cast as Santana Lopez, utilising her Latina half. Though initially in the background, her character was well liked and then promoted after the first season, despite well-publicised professional disagreements during the making of the show. Rivera also featured in the news for her documented relationship with rapper Big Sean, and their sudden break-up that led to her marriage to old friend Ryan Dorsey in 2014 (and Sean's equally polemic relationship with Ariana Grande). During this time, she also released her debut single ("Sorry") with Columbia Records. She has a son (Josey Hollis) with Dorsey, and had published an autobiography.

Tragically, Naya disappeared while out on a boating trip on Lake Piru with her son on July 8, 2020. An unknown person called the authorities upon seeing her son (four years old at the time) alone on board the boat. Fortunately, the child was unharmed and quickly brought to other family members, but he reported that he and his mother had gone swimming in the lake, and she never got back into the boat. He had a life jacket on, but she had not been wearing one.

This quickly led to a search of the lake and the surrounding areas for Naya, and the hashtag #PrayForNaya going viral as fans and friends hoped for her safe return. Unfortunately, the police found nothing, and it was soon concluded that she had likely died via accidental drowning. They believe that she and her son got flipped overboard by a current and she used her last bit of energy to get him back on before she drowned. Her body was found on July 13, 2020, seven years to the date her Glee co-star Cory Monteith was found dead, serving as a tragic coincidence.