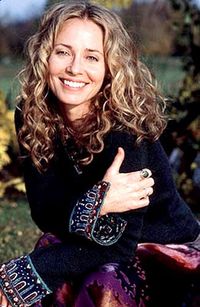 The most important thing to know about Susanna Thompson (born January 27, 1958) is this: if there is a major cable network crime show franchise, she has probably guest-starred in it. Her list of credits includes, but is not limited to: The X-Files, Law And Order: SVU, Cold Case, Without a Trace, The Twilight Zone (2002), CSI, and L.A. Law.
Advertisement:

She is also a Star Trek veteran, and is one of only a handful of actors to have guest-starred in all three 24th-century Trek shows - Star Trek: The Next Generation, Star Trek: Deep Space Nine (as Lenara Kahn, a love interest of Dax and a participant in the first same-sex kiss in franchise history), and Star Trek: Voyager (as the Borg Queen, taking over for an unavailable Alice Krige).

Her most famous roles are Lt. Col. Hollis Mann on NCIS, the Borg Queen in Star Trek: Voyager, Queen Rose Benjamin in Kings, Karen Sammler on Once and Again, and Moira Queen in Arrow.

She has also received awards for her work on the San Francisco stage, including roles in A Shayna Maidel and Agnes of God. And she happens to be very good at stage combat.

She is married to Martin Katz, a professor at San Diego State University.