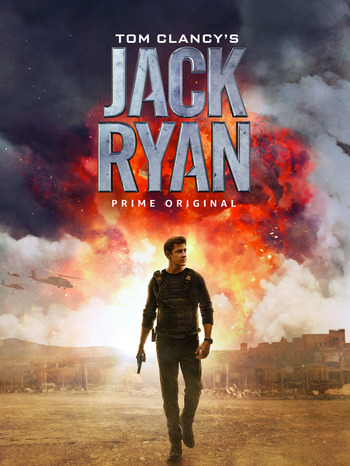 Tom Clancy's Jack Ryan is a 2018 spy drama on Prime Video, based on the character of the same name by Tom Clancy. It is produced by Carlton Cuse (Lost), Michael Bay, and John Krasinski, the latter of whom stars in the title role.

Jack Ryan (Krasinski) is an ordinary CIA analyst who, after noticing some questionable financial transfers, is thrust into international espionage, taking him from his desk job and into serious life-or-death matters — such as a growing threat in the Middle East who's planning a large-scale act of terrorism on the United States.

Wendell Pierce, Abbie Cornish, and Peter Fonda also appear in supporting roles. Jack Ryan is notable for featuring the fifth live-action portrayal of the character (Krasinski), following turns by Alec Baldwin (The Hunt for Red October), Harrison Ford (Patriot Games, Clear and Present Danger), Ben Affleck (The Sum of All Fears), and Chris Pine (Shadow Recruit). It's also the first television series based on the character.

Two seasons have aired via Prime Video. The third season is due to be released in 2022.

Afterwards, Amazon reported a fourth season will be produced after third season ends. Production has started on February 2022 in Croatia. It was later confirmed that the fourth season will be the final one, with a spin-off series headed by Michael Peña set to serve as a continuation as Ding Chavez.