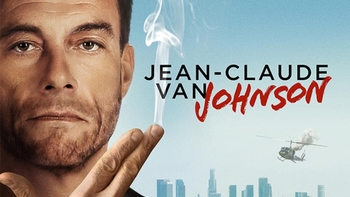 "My name is Jean-Claude Van Damme. I used to be super famous. Perhaps you remember my first starring role in Bloodsport. It is on television all of the time. Or maybe you've seen Timecop, which is like Looper, starring Bruce Willis, but like a million times better. But this is not a movie. And that man is not an actor. He's trying to kill me."
— "The man himself making the disclaimer before the start of the pilot episode."

Jean-Claude Van Johnson is a Prime Video original series starring Jean-Claude Van Damme, Kat Foster, Moises Aras, and Phylicia Rashad. The pilot was released in 2016 and the first full season is scheduled for release on December 15, 2017. The show is based on the premise on what if Van Damme is using his acting career as a smokescreen for his real job: A covert black-ops agent who's operated all over the world since the 1980s?

The show takes place in the present day where the actor himself finds himself burned out, thanks to the years he spent in Hollywood making a name for himself as an actor away from his native Belgium. After some time reflecting and meeting Vanessa, a woman he knew during his rising career, while having dinner out in Los Angeles, he decides to come back to the spy game and have himself reactivated with his old code name: Johnson. For his first mission back, he's ordered to go to Bulgaria and halt a drug smuggling group's operation in smuggling a new drug in the black market known as Hong Kong or HK.

An Amazon press release on January 2018 mentions that the show is not going to be renewed.

The show has examples of the following tropes: