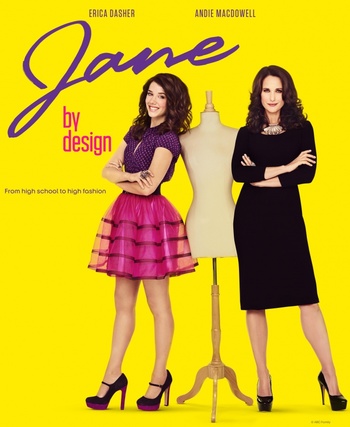 Jane By Design is an American teen dramedy that premiered on ABC Family in 2012.

Jane Quimby (Erica Dasher), an average, everyday 16-year-old girl, winds up with a job at the prestigious fashion company Donovan Decker and a chance to work with a world-famous designer, Gray Chandler Murray (Andie MacDowell) and her quirky co-workers, Jeremy Jones (Rowley Dennis), India Jourdain (India de Beaufort). The problem? They do not know how old she is or that she is still in high school.

Now Jane must juggle her two lives. She has the help of her childhood Best Friend Billy (Nick Roux), although his hidden relationship with Jane's rival/bully Lulu Pope (Meagan Tandy) causes problems in school. To furthercomplicate thing her older brother Benjamin "Ben" Quimby (David Clayton Rogers) started to work at her school as the athletic assistant.