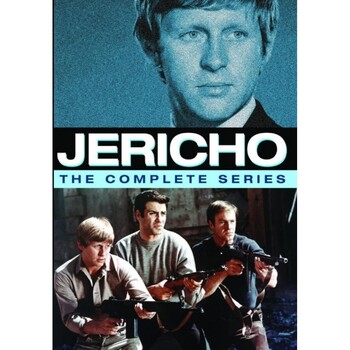 Jericho is an American television series that ran on CBS from September 15, 1966 to January 19, 1967. It follows the exploits of a trio of Allied spies (one American, one British, one French) during World War II. It was originated by Levinson and Link, who soon left the series and went on to create Columbo. Although the intrepid agents beat the Nazis on a regular basis, they couldn't defeat competing shows such as Batman (1966) and F Troop on ABC and Daniel Boone on NBC, so low ratings brought their mission to an end after only 16 episodes.

Not to be confused with invoked Similarly Named Works such as the 2006 series (which also aired on CBS), the My Little Pony: Friendship Is Magic fanfic, the British series Jericho of Scotland Yard, the video game Clive Barker's Jericho, or the wrestler Chris Jericho.

"Three specialists in the tropable":