Series / It Ain't Half Hot, Mum 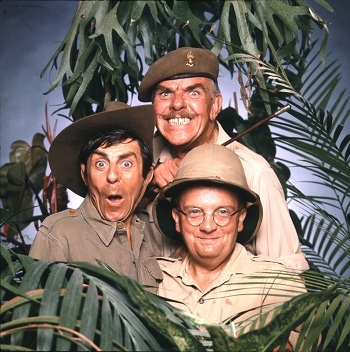 Yet another vintage BBC sitcom from before the days of political correctness. It Ain't Half Hot, Mum was written by the creators of Dad's Army. The show, which broadcast between 1974 and 1981, was about the adventures of a Royal Artillery Concert Party stationed in India (later Burma) during World War II.

Nominally in charge of things were officers Lieutenant Colonel Charles Reynolds (Donald Hewlett), a stereotypical, stiff-upper-lip British army officer, and Captain Jonathan Ashwood (Michael Knowles), Reynolds' none too bright second-in-command. Actually in charge of things was the hard-as-nails Battery Sergeant Major Bryn "Shut Up" Williams (Windsor Davies), the only true soldier among the main cast, and always quick to seize any excuse to berate the motley assortment of actors and musicians under his command.

Common plot devices included conflict with the Indian locals, Sergeant Major's belief that Gunner Parkins might be his son, and his attempts to have the Concert Party "posted up the jungle". Eventually he was successful, and from the fifth series onwards the action relocated to Burma. The Concert Party would usually perform a musical number Once an Episode.