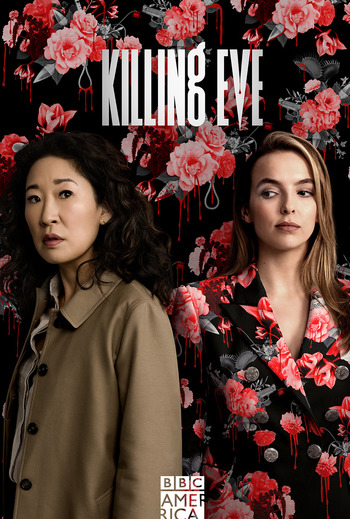 BBC America's Killing Eve is a 2018 thriller drama series developed by Phoebe Waller-Bridge, based off of a series of novels, Villanelle, by Luke Jennings. The series is a co-production between BBC America and BBC iPlayer; in the U.S., it airs on both BBC America and AMC (the latter as of Season 2).

Eve Polastri (Sandra Oh), a desk-bound MI5 Officer begins to track down talented, psychopathic assassin Villanelle (Jodie Comer), while both women become obsessed with each other.

In genre, Killing Eve is a fairly traditional piece of Spy Fiction — the main characters are government agents, assassins, and spies (and quite a few of them are Russian). But in themes and tropes, Killing Eve is quite unique. It places the homoerotic subtext between hero and villain at the center of its narrative. Villanelle is a Likable Villain who is still unquestionably a horrible person. Set against a backdrop of politics and intrigue, it largely ignores them, directing its focus instead toward an introspective look at its characters.

The first season was released in 2018, the second in 2019, and the third in 2020. The fourth and final season was delayed due to the ongoing COVID-19 Pandemic, before ultimately premiering 2022. The series concluded its run on April 10th, 2022. Episode recaps can be found here.

BBC America has confirmed potential spinoffs are in development.