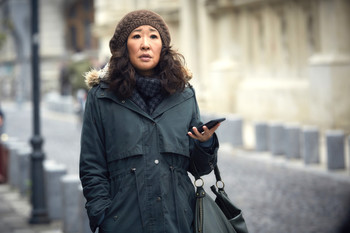 "Frankly, I don't give a shit anymore. She is outsmarting the smartest of us, and for that, she deserves to do or kill whoever the hell she wants. I mean, if she's not killing me, then, frankly, it's not my job to care anymore."

One of series' two co-leads. Eve is a bored, desk-bound MI5 security services officer with a fascination with female assassins. 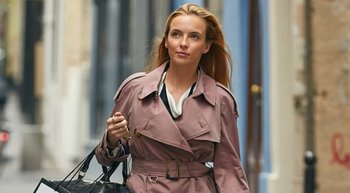 "I'm going to kill you nicely. But then I'm going to make a mess of your body afterward so it looks worse than it is."

The series' other protagonist. Villanelle is a talented killer-for-hire who clings to the luxuries her violent profession affords to her.

Eve's husband. Niko is a Polish maths teacher and Bridge tutor who worries about his wife's new job. He has an aversion to violence, and can’t understand Eve’s fascination with darkness and criminality.

A teacher at Nico's school.

Villanelle's handler, Konstantin is a Russian intelligence agent who recruits and runs assassins for a shadowy organization known only as The Twelve, telling them who to kill and then paying them after the deed is done.

A Russian assassin in the employ of Konstantin, sent with her boyfriend Diego and Villanelle to eliminate a member of British Intelligence. She is also Villanelle's ex-girlfriend.
Irina Vasiliev

Konstantin's beloved daughter. By his description, she's amazing... but annoying. So, so annoying.
Anna

Villanelle's new handler after she escapes from Julian in Series 2, until Konstantin takes back over.

Villanelle's former handler, who has returned to lure Villanelle back to the Twelve in Season 3.

A young tech genius and multibillionaire computer mogul with a secret weapon that he plans to sell to the Twelve.
The Ghost