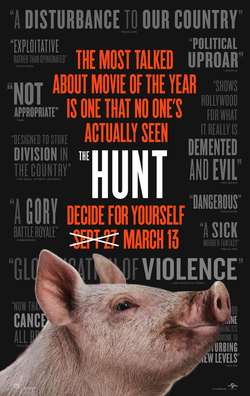 Original September 27, 2019 release date crossed outnote  This was due to the mass shootings that took place in El Paso

. Good luck seeing it in theaters, though.
"...but if you remember that time Logan Paul filmed a vlog with a real corpse in the Japanese suicide forest, then it quickly becomes clear that the film was held back until he was a slightly less controversial figure."
— I Hate Everything, on Airplane Mode
Advertisement:

A trailer or poster announces a work's release date, but before its release, the date is pushed either back or forward due to unforeseen circumstances. This can be either to a) avoid competition, b) a change in the production schedule, c) major issues during production or d) for being in bad taste in light of tragic events. Since the ongoing COVID outbreak has been tied to so many examples across multiple mediums, it has received its own page for works affected.

Not to be confused with Trailer Delay, where Development Hell causes a big gap in the original and final release dates. Anything victim of The Shelf of Movie Languishment is a victim of this. See Delayed Release Tie-In for when this trope affects The Merch.