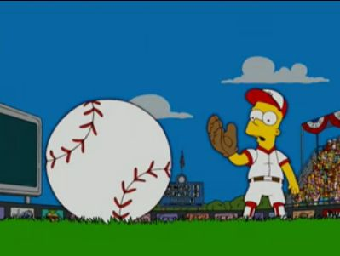 The error that ruined an entire season.

One day at the Springfield Little League Park, Bart catches the winning ball for the town's little league team, the Isotots, which sends them into the Little League Championships against Shelbyville. Because of this, the town celebrates the team as heroes and gives them the right to "behave like arrogant oafs", allowing Bart to moon them and happily get pelted with eggs by the team. Before the game, the Simpsons go shopping at Costington's and a tired Homer decides to rest on one of the sale mattresses. When he is caught in the mattress, he tries to save face by complimenting its qualities, which convinces a customer to buy the mattress. The owner of the store goes to Homer to congratulate him for making the sale and hires him as a mattress salesman.

On the day of the big game, with Shelbyville loading the bases and Springfield on the verge of winning. However, Bart misses the pop fly and constantly fumbles ball trying to pick it up, allowing Shelbyville to score four runs win the game, and costing Springfield the championship. The spectators boo Bart for causing the team to lose and he runs to Chief Wiggum to escape the mob. However, the Chief drives Bart back into and around the stadium and opens the car's roof so the crowd can throw garbage and beer cans at him. Bart is totally humiliated and is now a pariah.

Meanwhile, while Homer is selling mattresses, Reverend Lovejoy comes to him to help him find a mattress to put the spark back in his love life with his wife Helen. Homer suggests the "Snugglux" by Matrimonium and they buy it. The next day, the Lovejoys come to the house to tell Homer that their troubles haven't been solved, but as Homer is writing them a refund check, they begin making out on Homer and Marge's bed and enjoy their experience. They and Homer trade each other's mattresses; the next day, the Simpsons are stagnant and bored while the Lovejoys are acting giddy in church.

For the past few days, Bart has been getting harassed nonstop by Springfield's denizens for his error. In fact, the KBBL radio station has Jimbo, Dolph and Kearney sing "Bart Stinks" as part of its "Bash Bart Block". Seeing Bart depressed from the abuse, Lisa tries to cheer him up by taking him to a baseball convention to meet Joe LaBoot, a veteran player who had a similar experience as Bart's when his fumble ended up scarring the First Lady. Bart is at first relieved that somebody sympathizes with him, until LaBoot discovers his identity and gets everyone in the room to boo him, making Bart feel even worse. The next morning, Bart is gone, and Lisa wakes up to find that somebody had spray-painted the words "I HATE BART SIMPSON" over the front of the house. She and Marge explore the town to find that the phrase had been painted all over town (including on a passed out Barney), and discover the citizens looking up at the vandal writing the phrase on the watertower and discover that the vandal is none other than Bart himself, who has snapped into a state of self-loathing from the town's constant harassment. At the town's insistence, Bart jumps from the tower in a suicidal attempt to escape his ordeal.

Bart survives his fall and is knocked unconscious. While Marge visits him in the hospital, she hears a mob of townspeople outside chanting "Bart sucks!". Finally having had enough of the town's constant bullying, she steps outside and chews them out on their extreme vindictive behavior, effectively more than living up to their title as the "meanest city in America". Feeling guilty, the townspeople apologize for hurting Bart and agree to restage the game to fix his self-esteem. Bart awakens in his baseball uniform on the field and, after 78 tries, Bart finally catches the ball and "wins" the game.

In the meantime, Homer and Marge try to sneak back into the Lovejoys' house to reclaim their mattress, but they catch them in the act and, after a brief squabble, they settle on splitting the mattress in half "Solomon style". The Simpsons end up taking their half of the mattress and make out on it behind a billboard, just like they did on their honeymoon.

The episode ends sometime in the future, where an elderly Bart and Milhouse living at the retirement home commenting on the events that transpired, while a ghostly Homer asks Marge for ghost sex despite her pleas that it's "worse than nothing".

"The Boys Of Bummer" contains examples of :