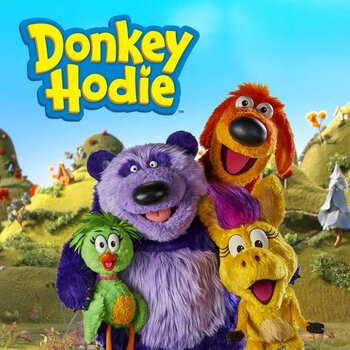 Donkey Hodie is a puppet Preschool Show. This is the second show inspired by Mister Rogers' Neighborhood after Daniel Tiger's Neighborhood. This time around, it's inspired by the funny, quirky side of Fred Rogers. It premiered on PBS Kids on May 3, 2021 and is produced by creator and performer David Rudman's production company Spiffy Pictures (Nature Cat, Jack's Big Music Show, and Bunnytown) and Fred Rogers Productions (formerly Family Communications Inc. and The Fred Rogers Company).

The original Donkey Hodie character appeared in 59 episodes of Mister Rogers’ Neighborhood from 1968-1993. He founded the land of Someplace Else when King Friday ordered him to leave the Neighborhood of Make-Believe and build his windmill “someplace else.” He is now known as Grampy Hodie and is the grandfather to the all-new Donkey Hodie, a vivacious young donkey with a magenta mohawk. She's a curious, sincere, resilient, and charming young go-getter who is beloved by her neighbors in Someplace Else because she is something else. She often bursts out of her windmill with a fresh goal for the day and a hee-haw!

The show has Donkey and her friends Bob Dog, Purple Panda, and Duck Duck encounter everyday childhood problems, and use perseverance, hard work, and good old silliness to overcome these obstacles. The show features re-imagined versions of Fred Rogers' songs as well as new ones.

In April 2022, the series was renewed for a second season

Purple Panda: Yeah, we gotta ride my spaceship into space. It's the only way to see the Lavender Lights.
Duck Duck: Yes, yes, of course. But..uh...here's the thing. I gotta go home now.
Donkey Hodie: Wait, now? What?
Duck Duck: Yes, yes, now...uh, you see, something very important came up...my books! My books need a nap and I gotta tuck them in. They like a lullaby.